Why Art, Why not work in a bank? From a very early age, I’ve always been fascinated with colour. I’d be scribbling and drawing all sorts and colour them in. People never had problems when it came to buying me presents for Xmas and birthdays. They bought colouring books, paint-by-numbers sets, art kits, all sorts! This set the foundation for life, being art crazy and fascinated with colour. So much so, that even jobs I did in the printing ink trade as colour matcher as well as in the paint trade. I was a Hand Printer in the graphic trade. I developed a good eye for matching colours. 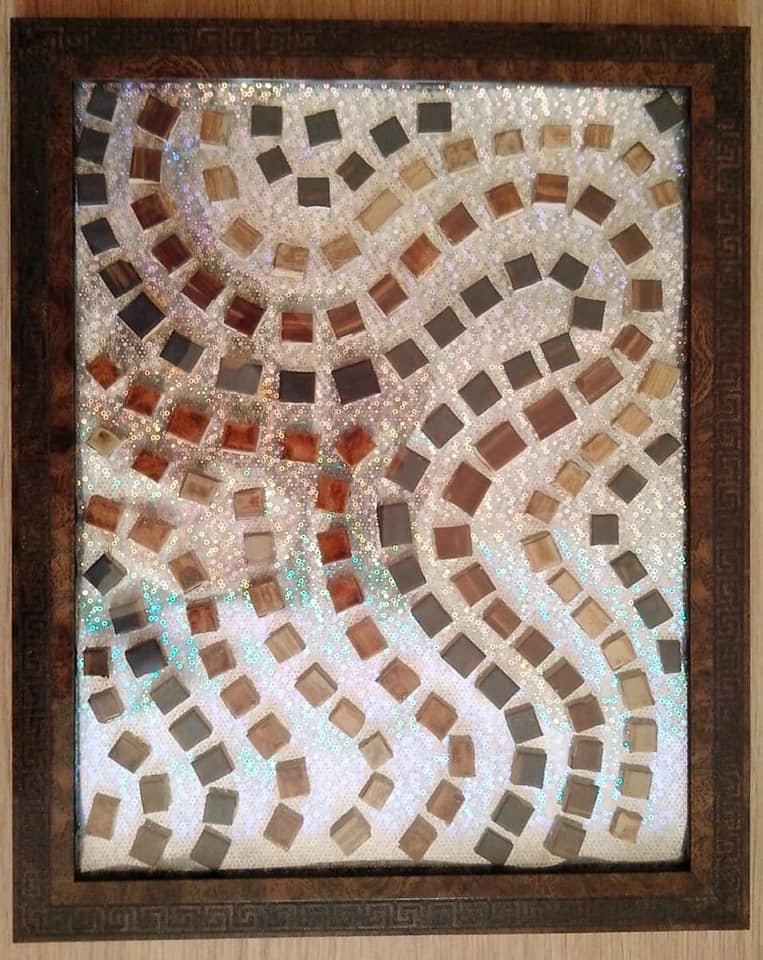 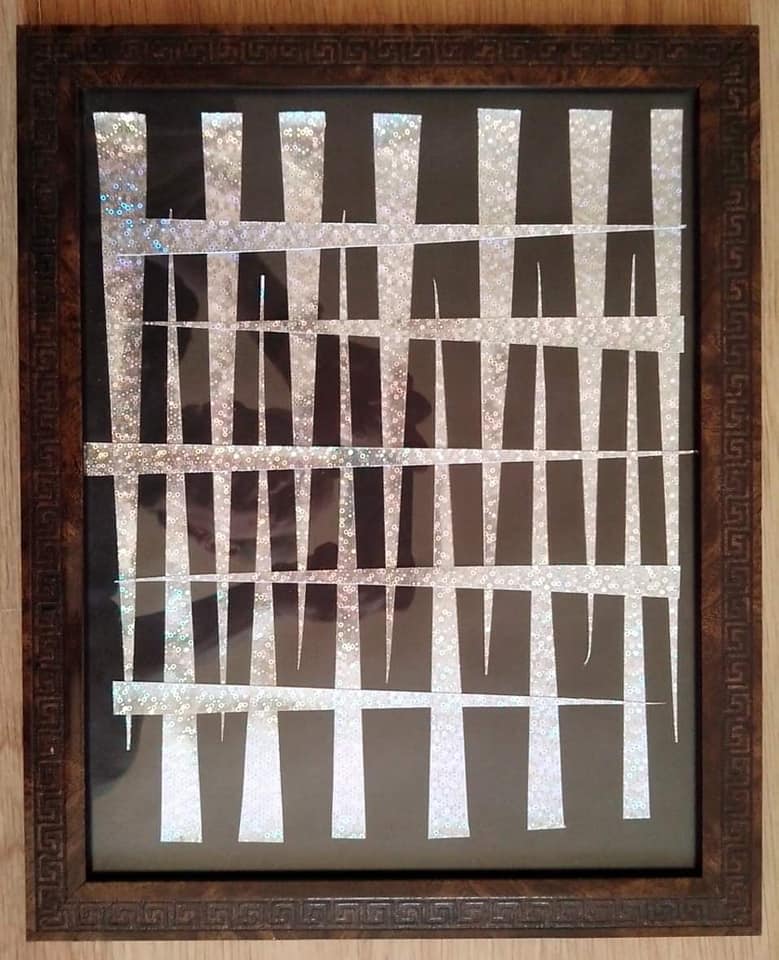 Did your parents approve of your creativity? I guess I was lucky in the way of creativity with my parents. My Mum had her business as a manageress in a bakery/confectioner’s shop – until I came into the world! (Sorry, not my fault there!) My Dad was a joiner/carpenter, for well over 40 years – I grew up with wood around me – and having the Redwood surname was very fitting! But my parents wanted me to have a “proper job’, where a regular wage paid bills, put food on the table and having some financial security.

Getting people to stop taking things for granted seems to be a powerful theme for you, why is this? I always try to convince people to not take things for granted, as in the case of Deaf people, I try to raise Deaf Awareness through my work, sound sculptures, to make people question their sense of hearing – to imagine life without sounds. It takes them out of their comfort zones – they automatically feel awkward, uncomfortable and embarrassed, being confronted in this way. Through my sound sculptures, I’ve had people criticising my work, saying it’s not art. I reply, pointing out the same was said about Michaelangelo’s work, as well as Rodin, Picasso, Van Gogh as examples and all now regarded as Great Masters of Art. Now Digital Art is slowly becoming acceptable in art circles. New mediums are are always constantly experimented with, in order to be noticed and stand out in the crowd. 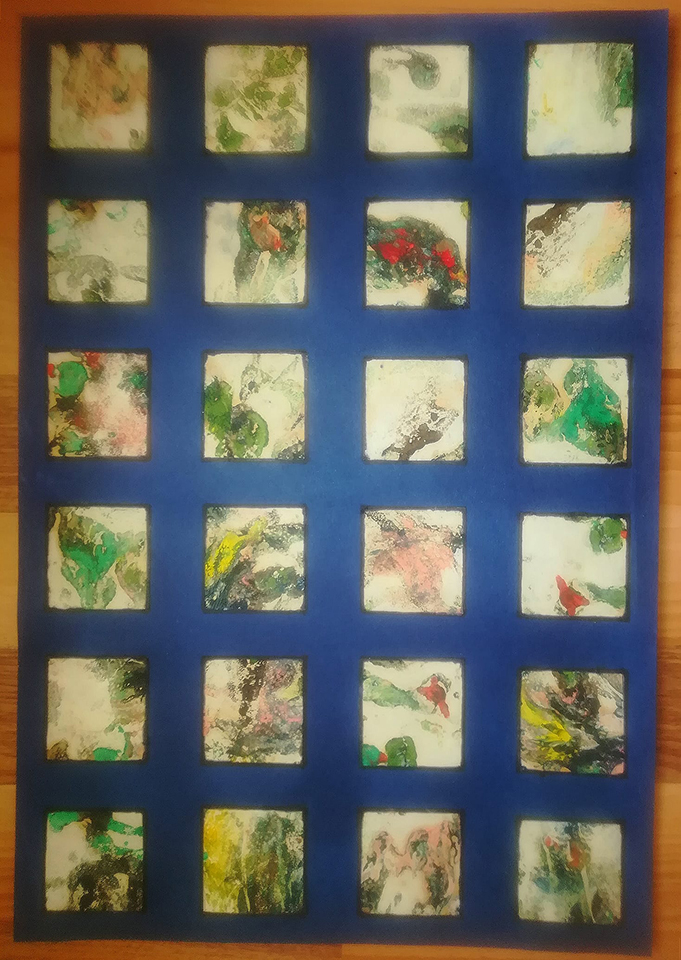 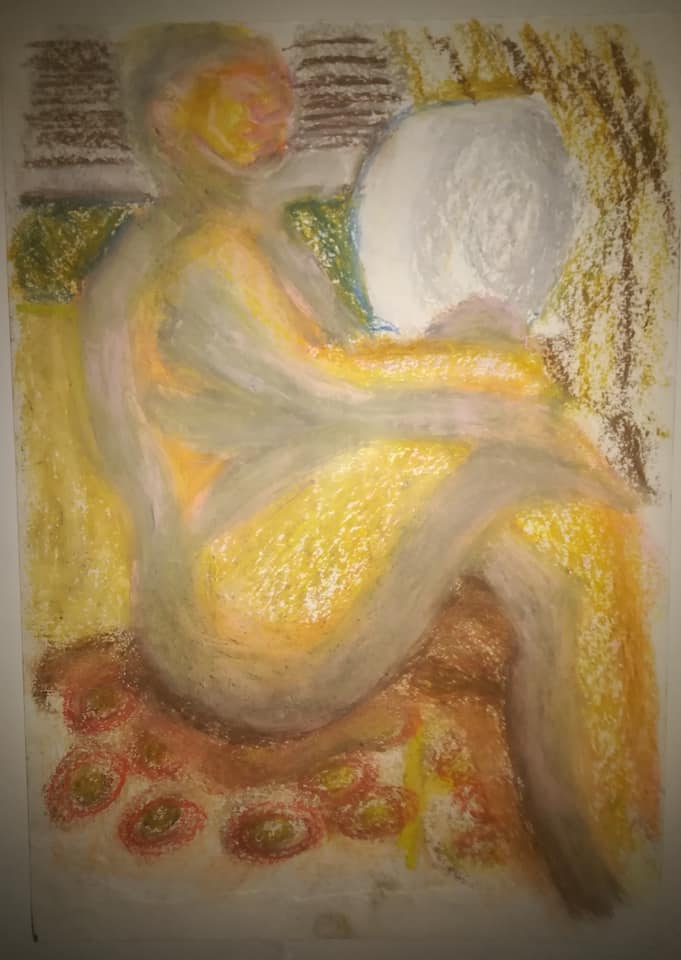 What does a perfect creative experience look like to you? Good question! It would have to be an accessible space big enough to call a decent studio! And big enough to accommodate a cafe and gift shop as well! It’s always been a dream of mine, to make visiting a studio a memorable one. Through designated viewing windows, people could watch art being created. Then visitors could go to the cafe for something to drink and eat, while artworks are on display and for sale. Finally visitors have a chance to buy a piece of artwork from the gift shop, that sells one-off/bespoke art gifts, as well as taking orders for commissioned work too! I would also run monthly classes for students, who want to set up their own studios. I’ve had personal experiences, working in studio co-operatives and eventually quit those places, due to greedy landlords, increasing rents all the time, that we have no choice but quit and move out.

“I’ve had people struggling to understand my work and the concepts behind that work. But it’s good in a way, it pushes them out of their comfort zone”

Is it better to be famous or truthful, please explain? Being truthful is more important I think. If an artist is lucky and becomes famous, sometimes fame can have a negative effect on a person’s character/personality and affect the artist’s artistic style, become over confident, and careless in their commitment and passion about art. Whereas being truthful and honest makes that person more respected and trusting. Also giving people an insight into the  character/personality, thus making that person more approachable.

If you could make yourself invisible and stand behind people in galleries what would you hope they would be saying about your work? If I was invisible, standing behind viewers, I would expect criticism along with praise, on my work. I’ve had people struggling to understand my work and the concepts behind that work. But it’s good in a way, it pushes them out of their comfort zone and in turn pushes me out of mine. 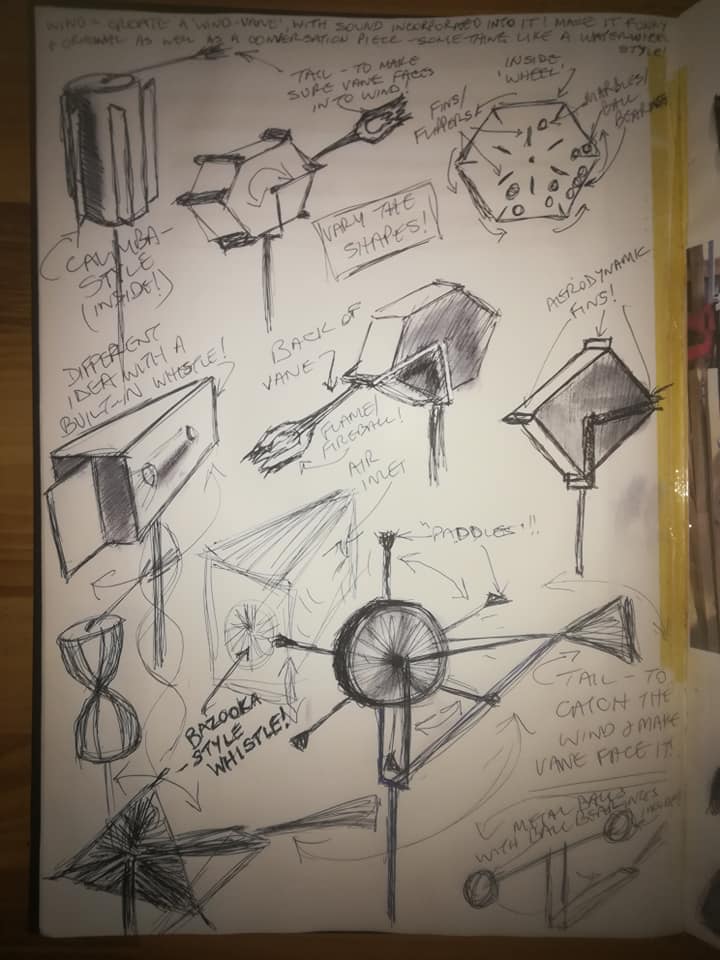 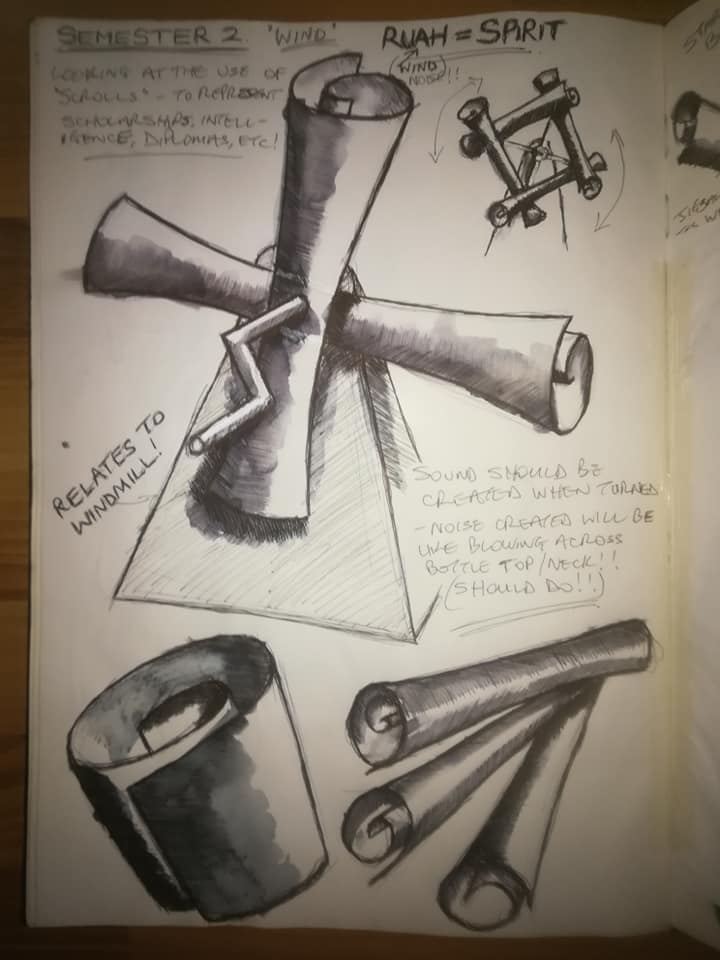 If you could change one thing about the art world, what would it be and why? I’d change the elitism within art circles. For example, you could have a well-known artist at one end of an exhibition room, then at the other end could be a young prodigy who has a good grasp of colour and materials – there’s bound to be a conflict of loyalty to the famous and established art, against the promise of a new art level, hope and a fresh approach to Art’s future. People don’t like change but sometimes change is what we need, to keep the buzz of artistic talents/ gifts alive, and not stifle or suppress it.

I remember reading that you were working on a Sensory Garden in Salford, did that ever happen? If not, what happened? The whole thing fell through, due to lack of funds to commission the project. That’s part and parcel of being an artist, we have to take the rough with the smooth! Whenever councils are struggling with limited funds, it’s nearly always art projects that are first to suffer. I’ve had many disappointments/setbacks, similar to the Salford Sensory garden, in my time. Just have to live with it and carry on hoping…! 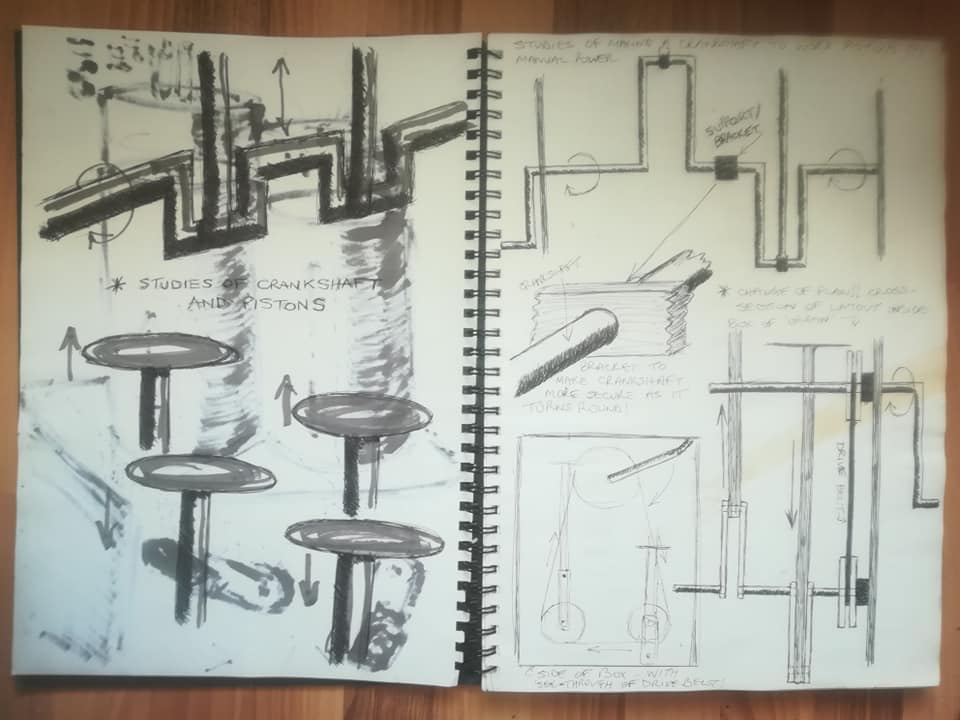 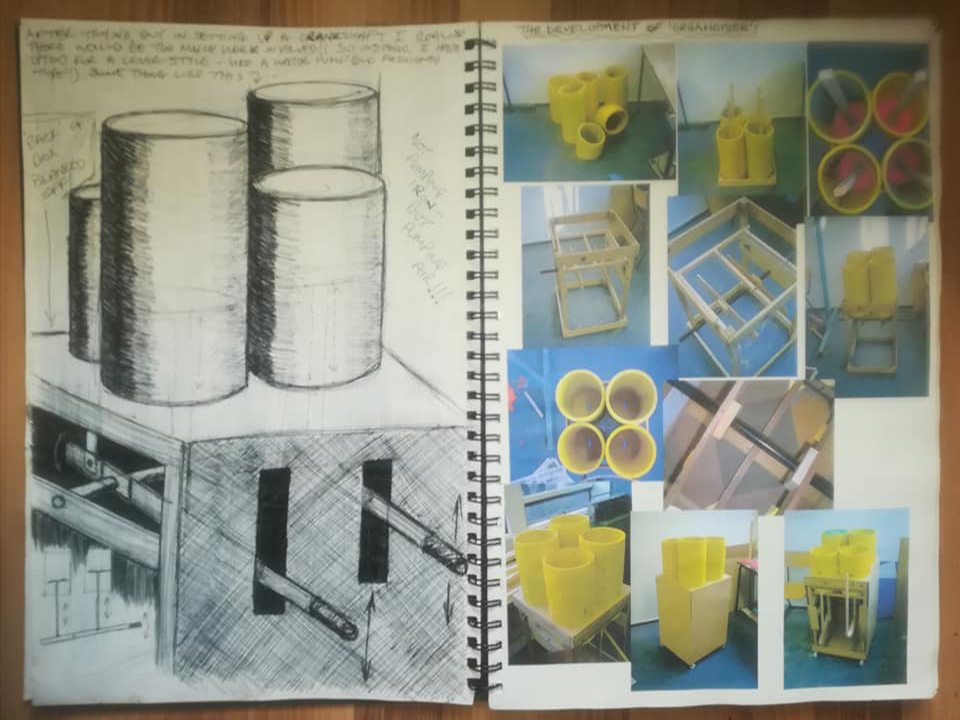 People interact with sound through my work and in doing so, they become aware of their own sense of hearing and realise that the not-perfect sounds created are equivalent to how deaf/hard of hearing people hear sounds – muffled, muted and distorted. My work makes people question their ability to hear and how much they take it for granted.

Frustration is a huge part of being an artist, how do you deal with it? How do I deal with frustration? Well, for example, this could follow on from the previous question, about the sensory garden. As I said earlier, about disappointments and setbacks – it can have a crushing effect on confidence, self-esteem and belief. I try to console myself with the fact that commissions were offered to ME, and not anyone else. I try to get feedback and sometimes I also get advice and tip-offs of where else to try applying for commissions.

What advice would you give to up and coming artists? My advice would be, do your research on artists you like and the kind of art similar to what you’re doing. Researching gives you a better connection and understanding of your work with that of artists you like and respect. Try and communicate with them via emails, build up a rapport with them. Sometimes they will invite you to their studios for personal interviews with them! It does work as I’ve done it myself. Another piece of important advice I want to put here is – if you don’t value your own work, no-one else will. By that, I mean putting a price on your artwork – people are going to expect buying art will be cheap – whereas the cost of your time, your ideas, your developments, successes and failures are some of the factors that command a reasonably decent price. In turn, people are going to pay more attention and see why the art is valued at that price. People tend to scoff about art being “thrown together” or paint “slapped about”, without any thoughts. But they’re not aware of the background in making that art. Like political connections, spiritual meanings, emotional ties, personal feelings, etc. – all those have to be taken into account to help give the art more backbone. The final thing I want to add is – if you have a dream, hold on tight to it but there are times in life when you have to let go. If you do let go of your dream – never ever lose sight of it – believe that you will be reunited with your dream. Believe it! 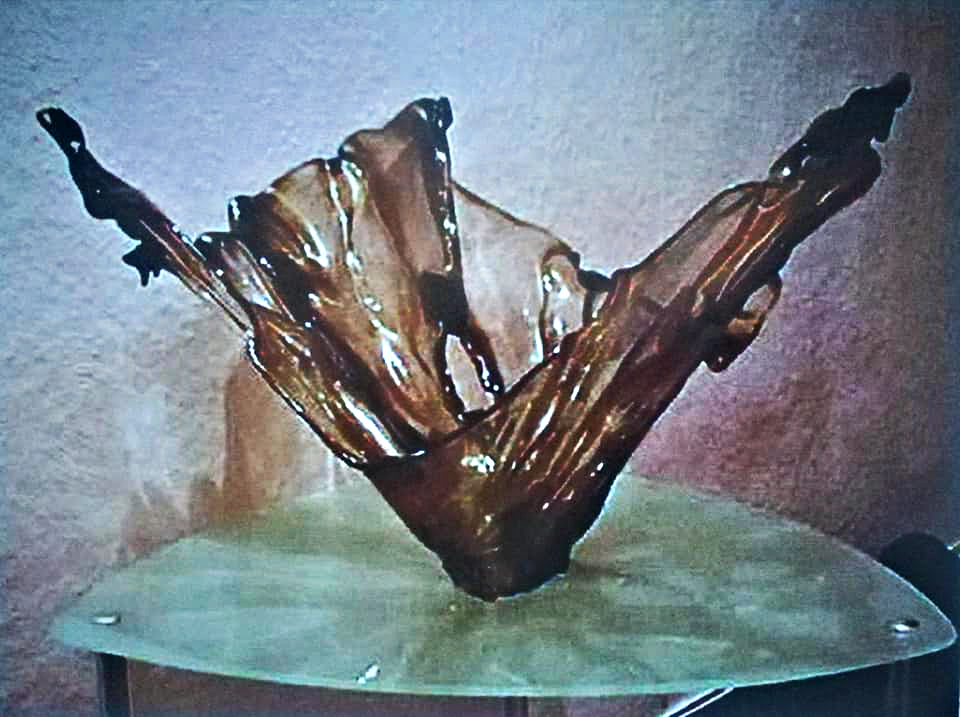 “If you have a dream, hold on tight to it but there are times in life when you have to let go. If you do let go of your dream – never ever lose sight of it”.

What are you working on at the moment? Well, I’m doing a series of paintings for the Bolton Deaf Social Club, which I’m Vice Chairman of. The paintings will be part of the Arts and Crafts Fair, in which other Deaf members will contribute and participate in. The fair had been cancelled already three times, due to Covid19! So we’re hoping the fair will be allowed to go ahead early next year – hopefully! That’s where I am at present, art-wise!

What are your influences in Art? My influences in Art varies but the main ones were/are – Luigi Russolo, who was a founder member of the Italian Futurism movement in the early 1900’s – he wrote his theory on sounds – “The Art of Noise”, exploring the use of different sounds, especially industrial ones in factories. His works have even influenced today’s electronic music industry, and is regarded as a pioneer. I do have other influential people in sound but too long to talk about in this interview! But I am influenced by Andy Goldsworthy, Banksy, Richard Long and Kate Malone. Other people who have been part of my life have made their mark as well. But one person stood out from the rest and was responsible for developing my art, was my late Art teacher, Alice Urmston. She was the one who said to me, “With art, anything goes – never be afraid to explore” – that’s held me in good stead! She would’ve loved TCK (The Creative Kickabout Facebook Group), she was an amazing person, a bubbly, get-up-and-go character. I still miss her, her witticism and her laughter. Thank you Alice, for the good times and memories!

What are your favourite mediums in Art? As much as I like to dabble in all kinds of stuff, my favourite mediums are – wood, acrylic paints, Perspex/clear acrylic, and Papier Mache. But I will try anything – just to say “I’ve worked with that!”. At the same time, I’m continually exploring art – it’s never ending. There will always be new materials becoming available and art has to be able to embrace new challenges, by exploring and experimenting with these materials, to see what results can be achieved. Like Alice said – anything goes in Art!