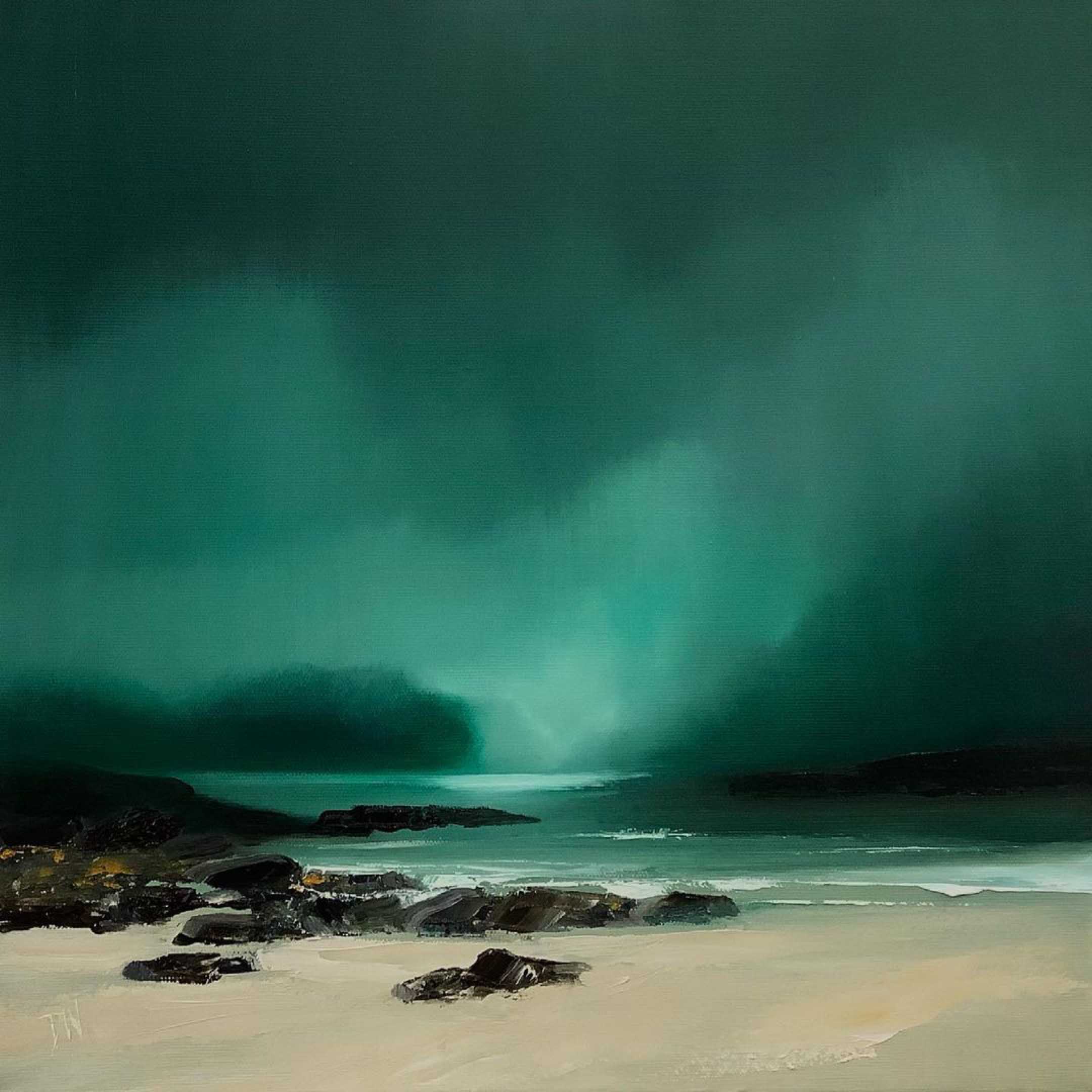 “Painting is an act of worship for me”

Creatively, how did you get to where you are today?

I think I was born with the mindset of wanting to create and have made art since early childhood. However life got in the way and I ended up studying nursing after leaving school. Ultimately it was a good choice as it allowed me to see life and travel extensively and attend Glasgow art school evening and summer school while having a reliable income. I tried every evening class they had to offer but drawing and painting always came up trumps. I decided to take a leap in my thirties – I left my nursing career and did a portfolio year at GSA followed by a year learning life painting at a small classical atelier in Sydney Australia- two polar opposite art schools, GSA being quite conceptual and the Sydney school being almost entirely technical.  Since then I haven’t looked back, I’ve developed my painting by a process of experimentation and practice. My studio is in a shared complex with other artists and we bounce off each other’s creative energy which is wonderful! 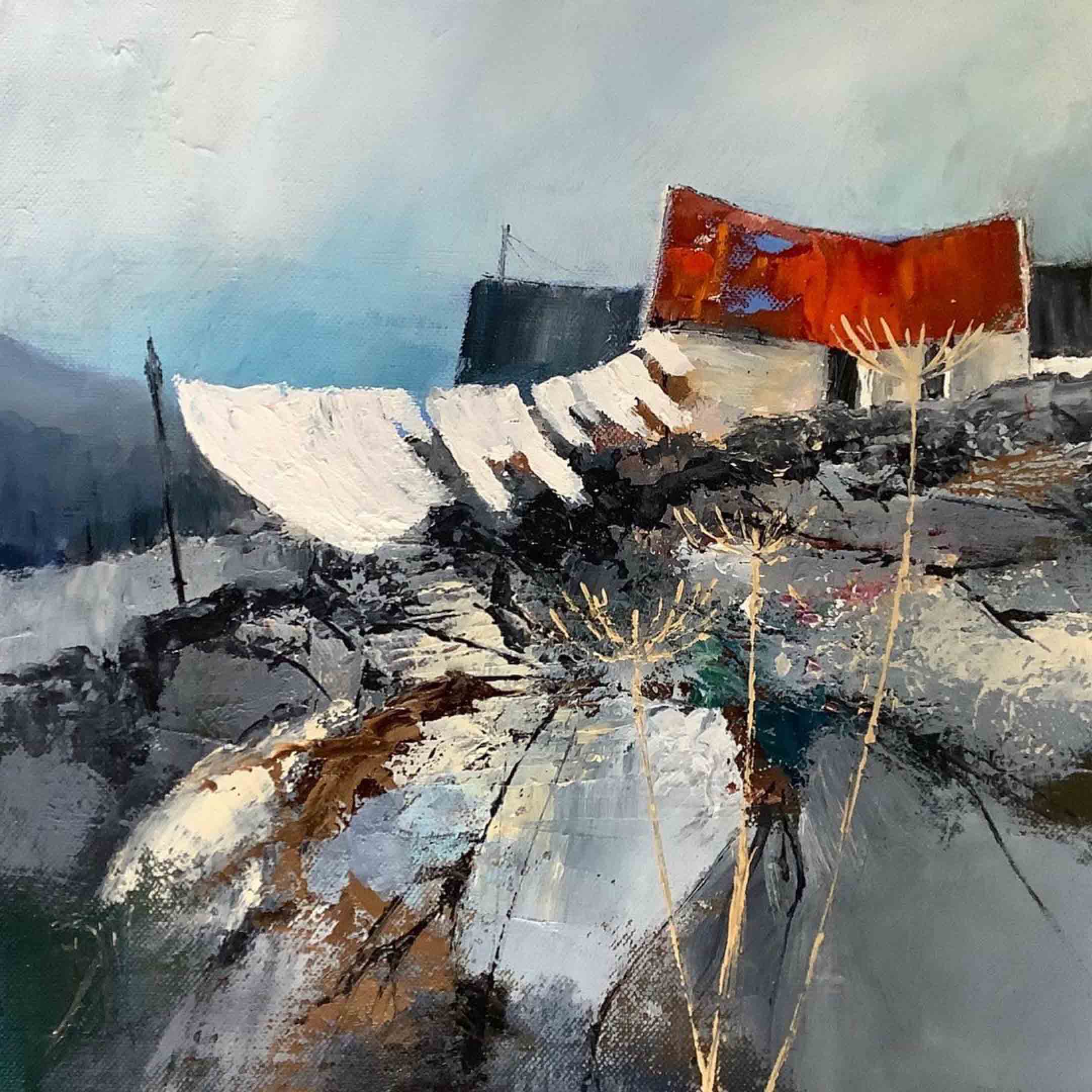 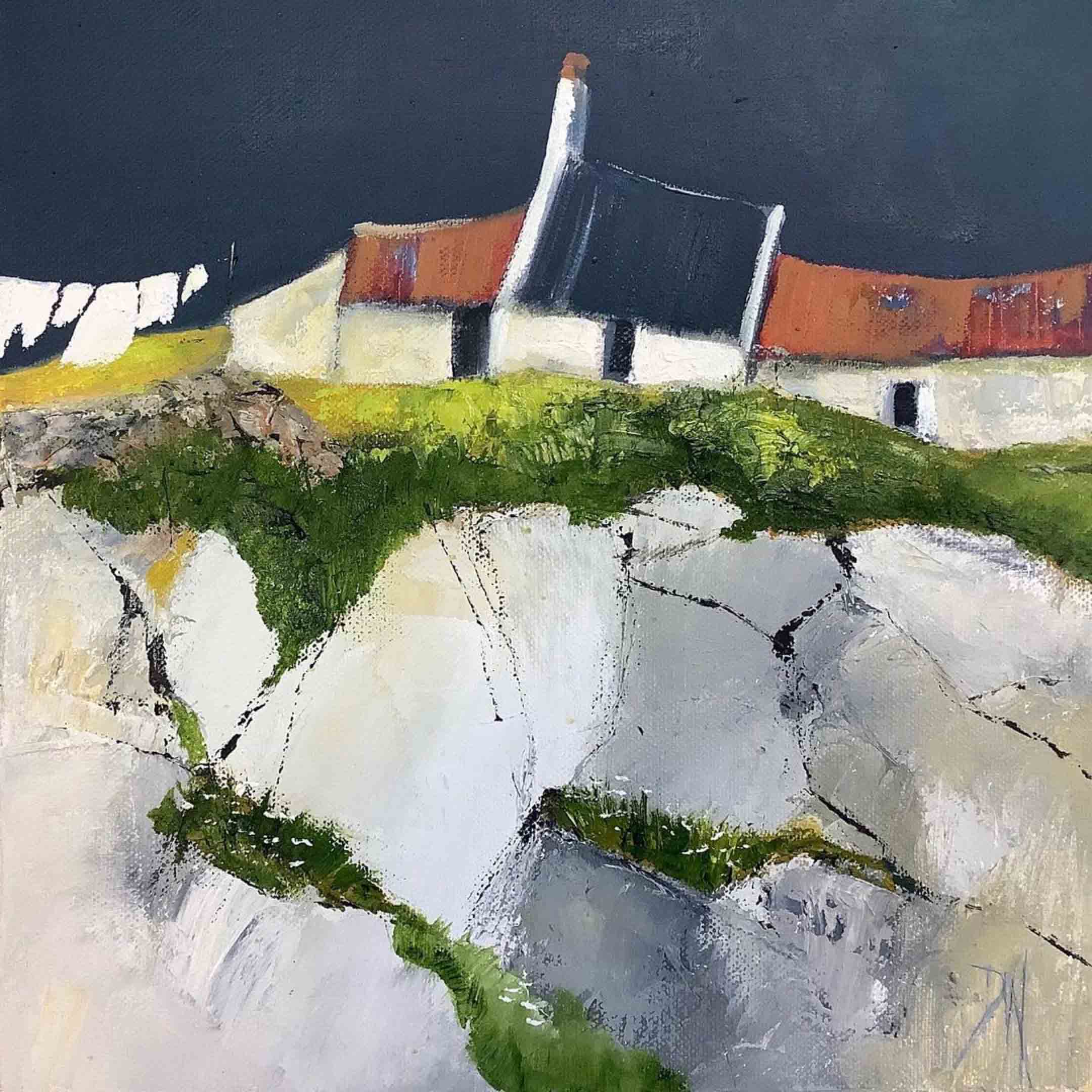 Your work is very colourful and also dark and moody, can you explain the opposing forces?

I live in the north of Scotland which has a very particular light and tends to have some dramatic weather. My dark and moody yet vibrantly colourful work is simply a reflection of the landscape that surrounds me as I see it.

Could you tell us about your creative process?

Painting is at best an act of worship for me, an emotional response to the landscape. I spend a lot of time outdoors, walking on nearby beaches and hills, or kayaking along the coast to see the landscape from a different perspective. I always carry a small sketchbook and a tiny watercolour set and some charcoal or ink in my pocket and try to sketch every day outside even if only for 10 minutes. These are rough but will fix an idea in my mind, especially if I write some words beside them to remind me how I was feeling. Sometimes if conditions are right I will start and finish a painting en plein air within a day but more commonly I’ll take my sketches into the studio and work them up from there. Ultimately when painting landscape I’m mainly interested in atmosphere and I’m always chasing that enigmatic light! 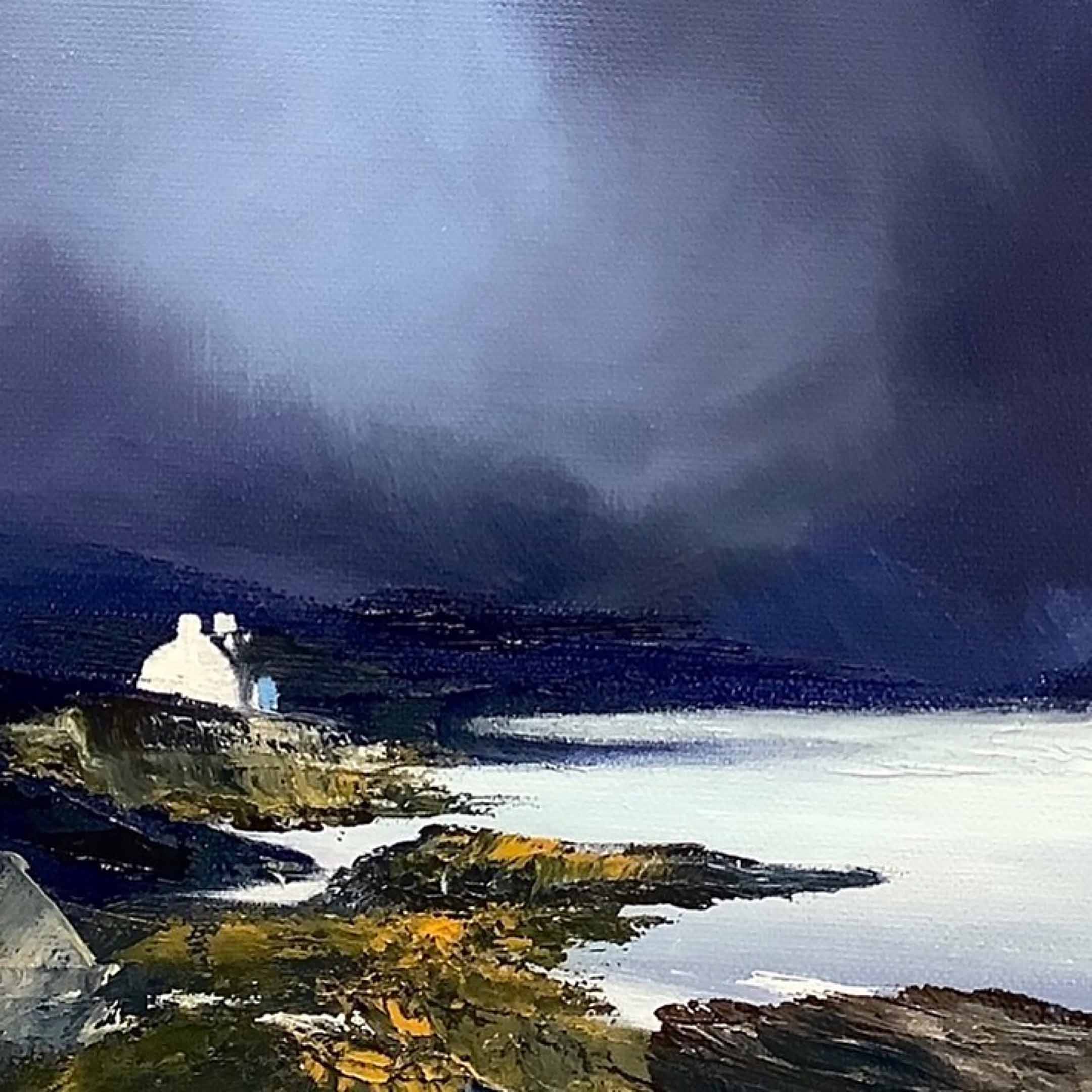 “These moments fill me with awe and remind me of my (tiny) place in the universe”.

Which artists have influenced you the most?

As a Scot I was raised on the work of the Glasgow boys and they still hold a special place for me. They were a small group who, in late 19th century revolutionised Scottish painting and ushered in modernism. James Guthrie in particular painted very evocative paintings of highland life.  Other Scottish landscape painters whose work I go to for inspiration are Joan Eardley and James Morrison, who lived and painted in small villages on the east coast. Surprisingly maybe, contemporary artists whose work sparks me are mostly figurative painters, like Casey Baugh who paints figures in cityscapes. Ultimately I’m interested in light on form, no matter what  the subject is.

Some of the colours in your painting are astonishing, can these be seen in the Scottish landscape or are they an amplified interpretation?

I don’t think my colours are really amplified but maybe I tend to go for the ‘wow’ moments, the times when the light bursts through the rain clouds or comes blindingly through the trees and almost transcends the natural. These moments fill me with awe and remind me of my (tiny) place in the universe. Of course Scotland can have its grey days but the colours can also be very intense due to the dark skies and strong northern light.

What other locations/ areas of the world do you like to paint?

I’ve had the privilege of living and working for significant periods of my life in other parts of the world, most recently Nepal which is a joy to paint with its colourful life and stunning mountains. I do love to paint and draw as a way to get to know the bones of a new place, but there’s kind of a rugged honesty about the north of Scotland that always draws me back. 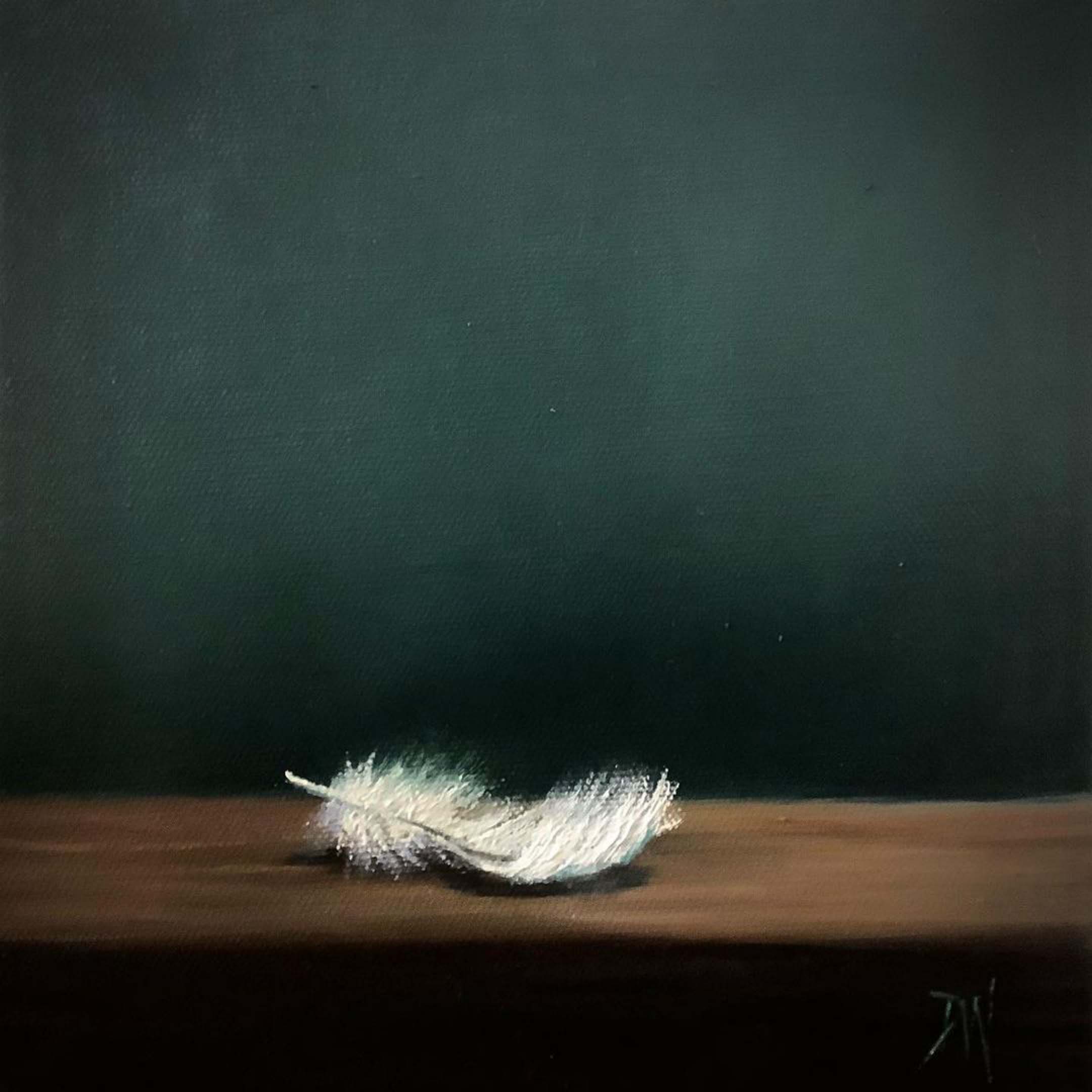 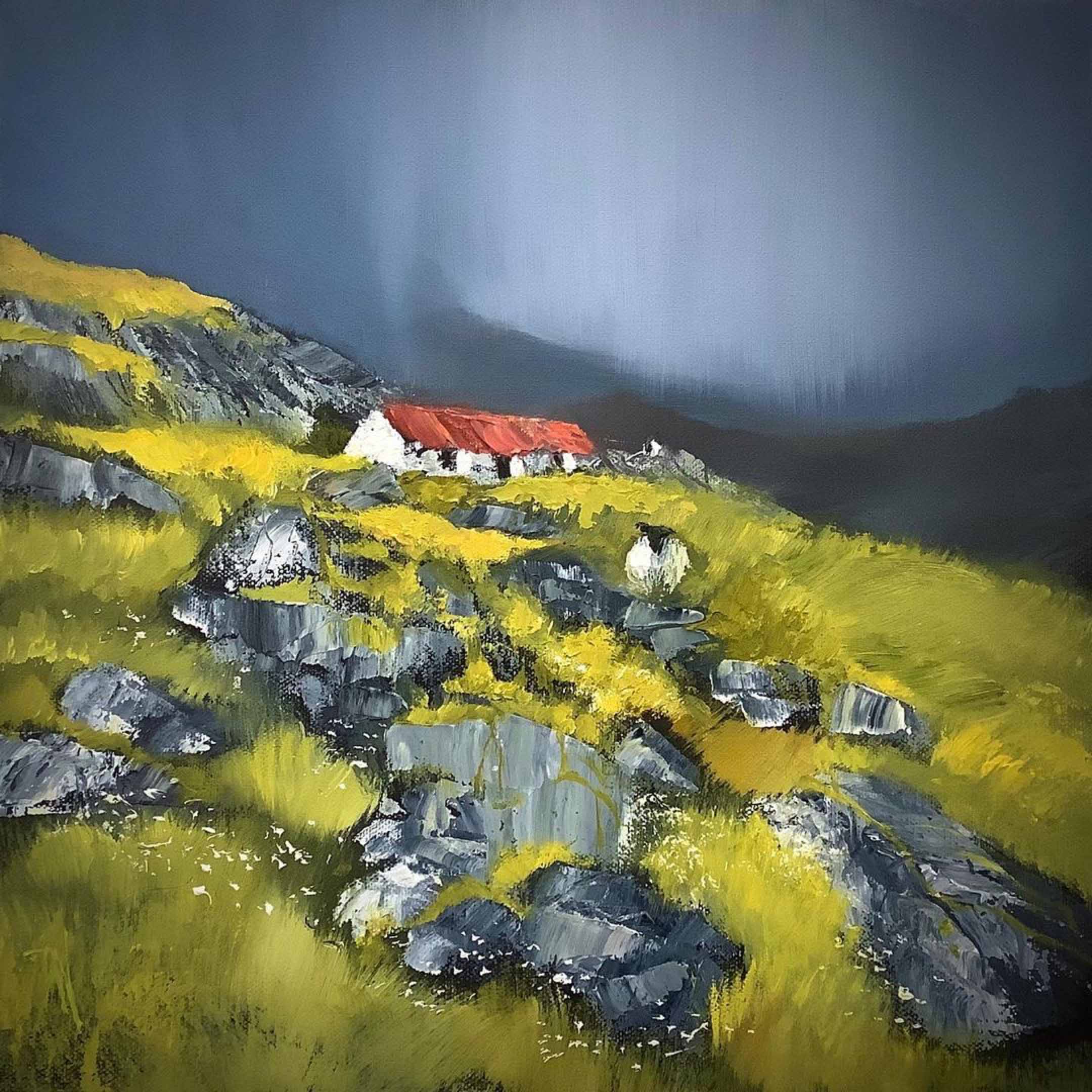 Your subjects are very diverse, what inspires you to paint a particular subject?

I’m ultimately interested in light on form, whether that be landscape, human form or object. I always carry a sketchbook so will draw anything or anyone that comes across my path!

Have you ever had a creative block and if so how did you push through it?

I do have the odd day of watching Netflix and eating my way through the fridge, but to be honest I more often suffer from overload of ideas, so that I struggle to complete work before moving on. If I ever do have a slump it’s usually with an exhibition deadline looming or a commission that isn’t really sparking me up. When it does happen I don’t go to the studio, I get out in the forest or beach with some good music on and just walk until I find my centre again.

What is the next creative step for you?

Ive just had a sketching trip to Caithness at the northern tip of the country and am really inspired by the coastline up there- the drama of the cliffs and weirdly shaped stacks, rising out of the sea, big skies and of course that intense northern light. Parts of it are also pretty isolated, only seals for company. So I think I will be back up there a few times over the coming months to see how it changes through the winter. I have some large blank canvases at the ready!