“I don’t tend to overthink things when I’m working like this, I just tap into my imagination”

What makes you choose your subjects?

I’m influenced by things daily; I might see a facial expression on a friend’s face, or a phrase might come to mind. One day, I looked up and sighed for some reason or another. My mum said, ‘He can’t help you!’ An old, common phrase but I could see the drawing immediately in my head. Often, drawings are directly influenced by my mood, a thought will just pop into my mind and I just go with it. At other times, I’ll just start and see what happens, I don’t tend to overthink things when I’m working like this, I just tap into my imagination, see who emerges and where the lines take me.

I also do a lot of commission and project work so, at those times, I’m led by the client’s vision.  I enjoy the challenge of commission work, finding the balance between my view and theirs. I’ve got a great job! 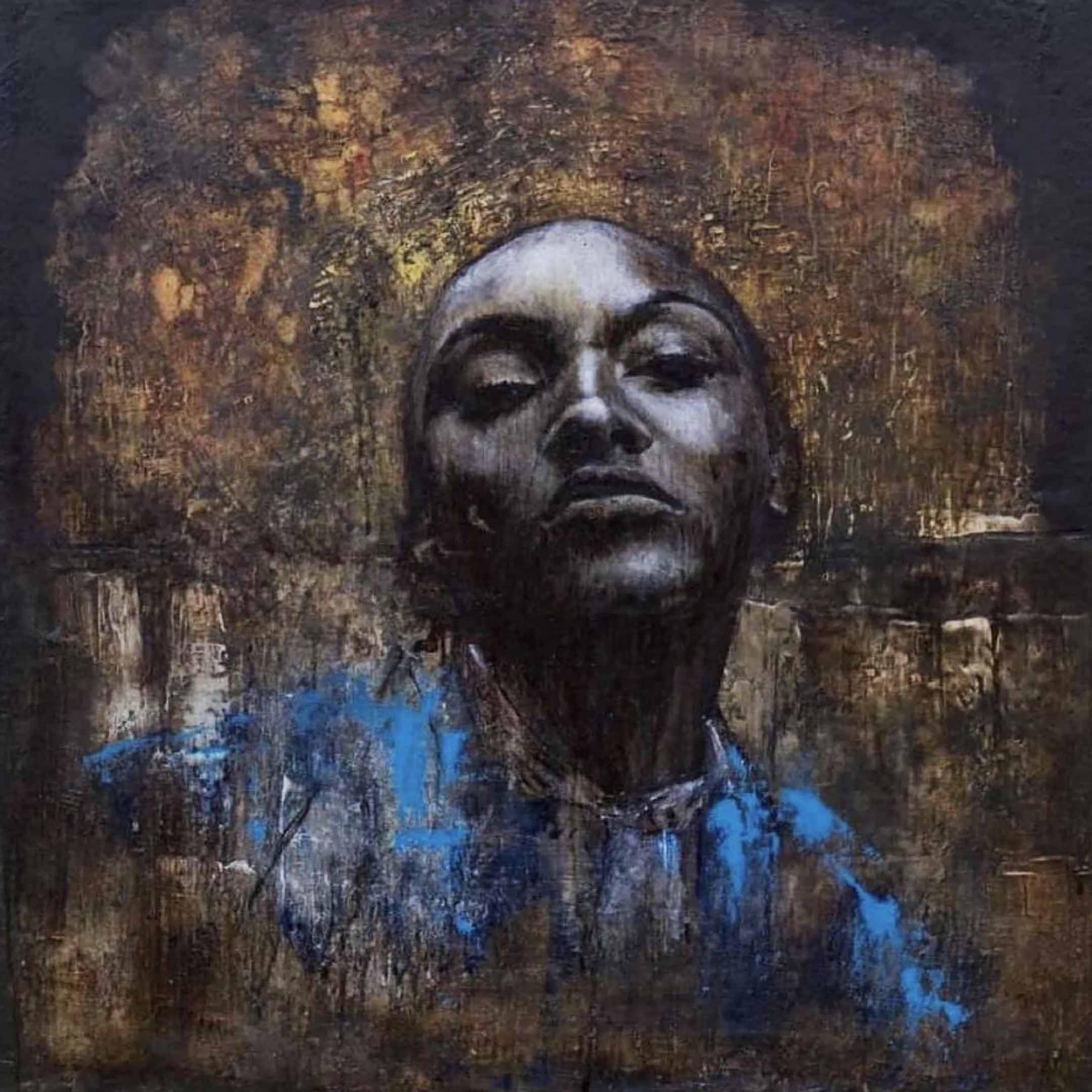 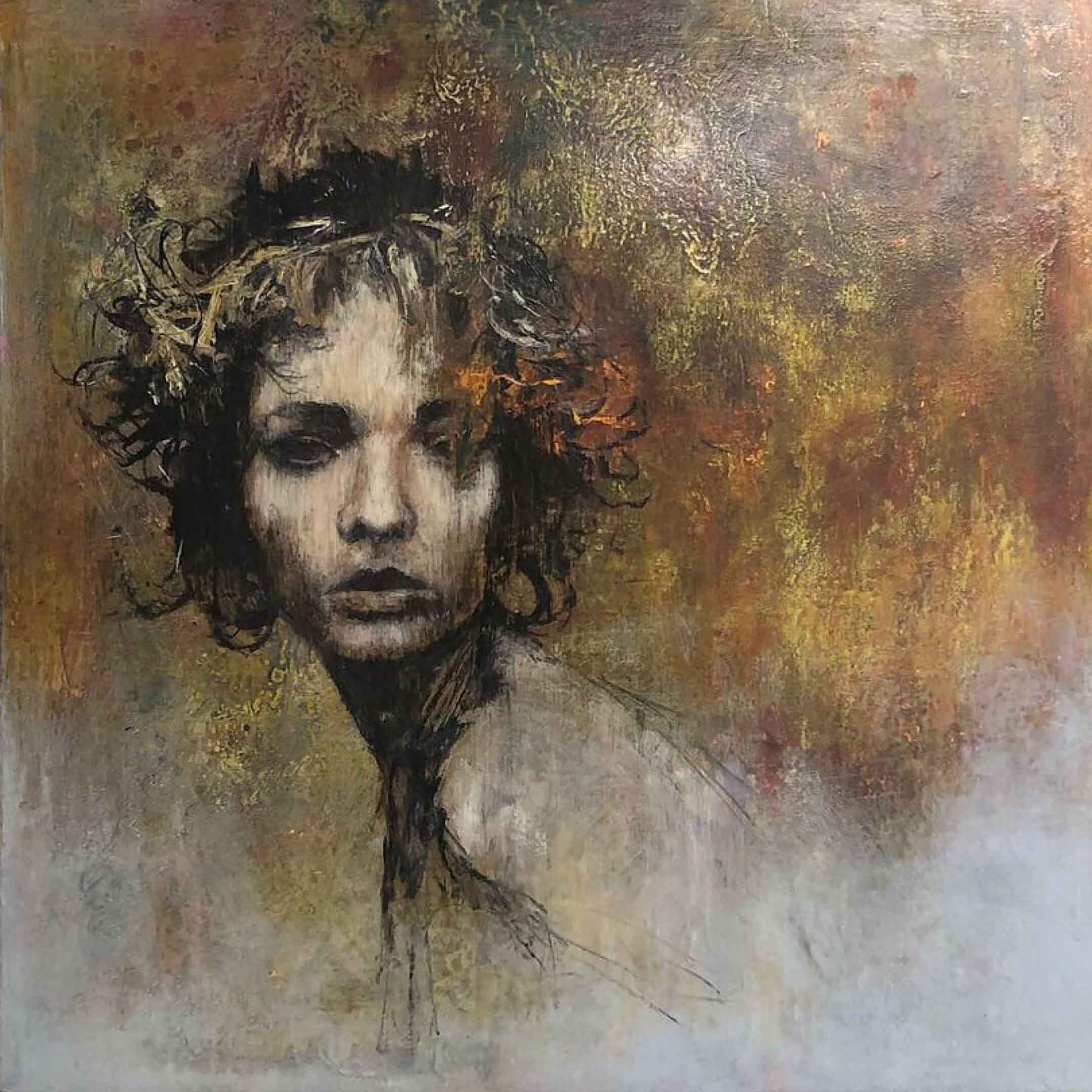 Who has been your favourite person to paint?

My work is made up of a mixture of people – some I know, some I’ve made up. Like I mentioned earlier, sometimes I’ll start making marks and I’ll try to see a figure but my subconscious must be always present because people will say, ‘Oh, I can see your sister in there.’ It’s funny how they create their own life, some of these figures. Many of them are inspired by people I know or notice.

The best portrait I ever did, which sounds pretty awful, actually, was when a friend of mine turned up at my studio and he’d just split up with his girlfriend. He was hanging around and I was in the middle of something, focussed on what I was doing. I remember turning around and looking at him and, because his facade was down, his masculinity was down and his ego had disintegrated, I saw something in him that was like a raw truth. I plonked him down in a chair and I asked, ‘Can I draw you?’ He said, ‘I don’t want to talk’ and I said, ‘We don’t have to talk.’ I gave him a book to read and I started to paint. I have to say it was one of the most amazing portraits I’ve ever done, I felt like I’d really captured something real. It still speaks in my mind as one of the most honest portraits I’ve ever done. 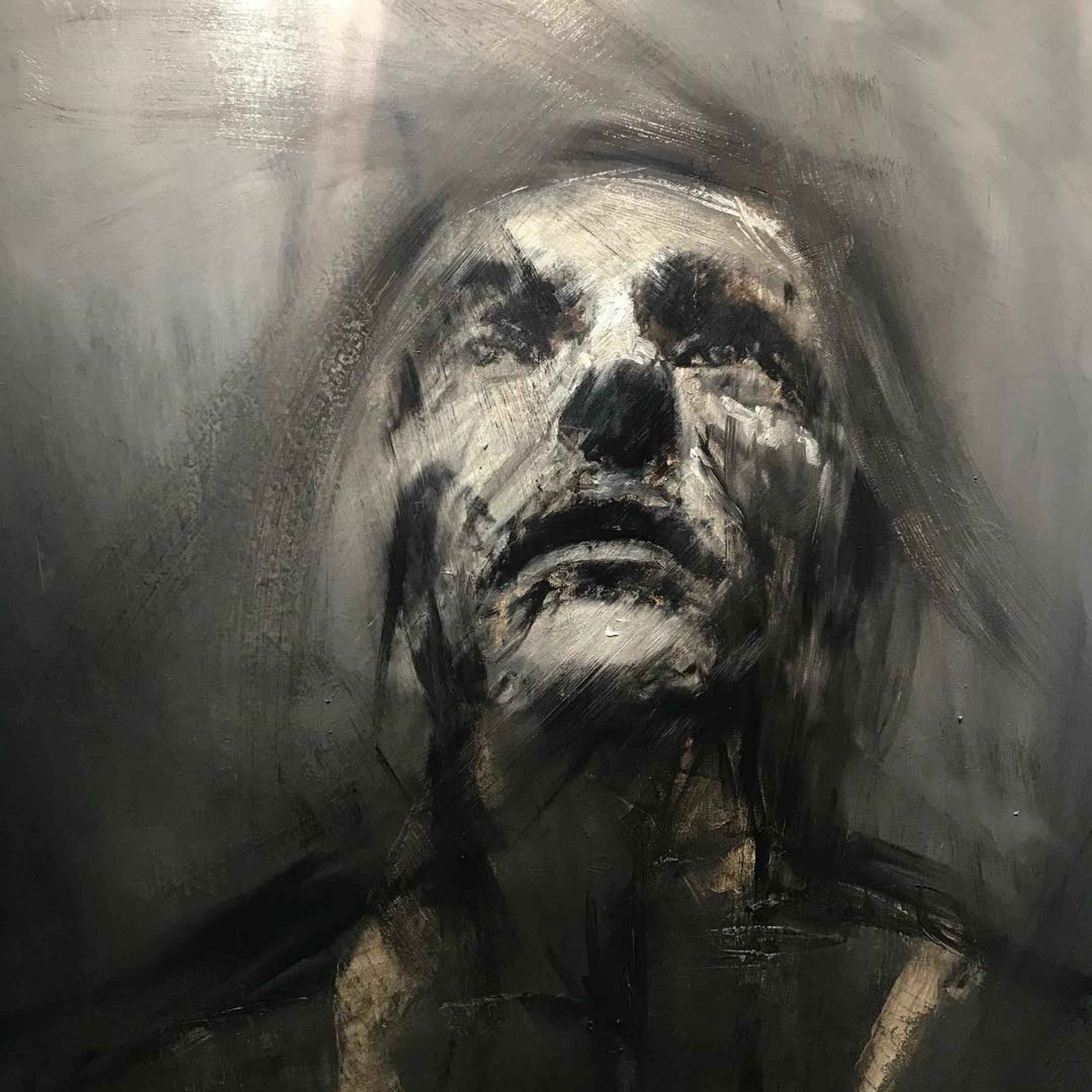 “I see my creativity like a passenger who comes and goes.”

Where do you go to feel inspired?

I’m quite lucky really because my house backs right up onto the moors. I’m about 10 miles out of Manchester to the north on the Pennines, so there’s just hills. I do a lot of mountain biking, or I’ll go for a run up there. I love being out, up on top of the moors because it clears my mind. I’ll sit up on the hills, which overlook Manchester, and it’s so peaceful that I find I can just think clearly. My mind races all of the time, I’m constantly thinking of ideas or how I can move my art forward or how to execute a commission. When I’m out on the moors, my mind slows down and I can better find the answers I’m looking for.

When have you struggled to be creative?

The answer to that is often. I see my creativity like a passenger who comes and goes. I have learned to accept that this is just the way it is, there’s no reason and it’s not because of any external influences, it just is! I will have weeks on end where my creativity is flowing, where every drawing is a success and I feel fantastic. It’s hard to explain but, when I’m really absorbed in a drawing or painting, it’s almost like I’m not there, I’m not thinking, my hands are just moving. Sometimes, I’ll stand back and my conscious mind will kick back in and I’ll be surprised at what I’ve created. Then, for no particular reason, it just goes, exactly the same as writer’s block I should imagine. For as long as a week sometimes, it’s just gone, everything I create is flat and lifeless. When I was younger, I used to worry about it so much, convinced that I couldn’t do it anymore. Now, I can recognise it and I try to turn it into a positive. I’ll take a break and I start experimenting with paints and techniques, it’s during these times that I might discover a new way of developing my drawings, so I’ve learned to use my creative lulls instead of just driving myself mad panicking that it might never come back. I don’t know what it is, some kind of creative spirit that comes and goes. The difference now is that I know he’ll be back. I’ll wake up one day or sometimes in the middle of the night and just think, ‘Right, it’s back.’ I can feel it. 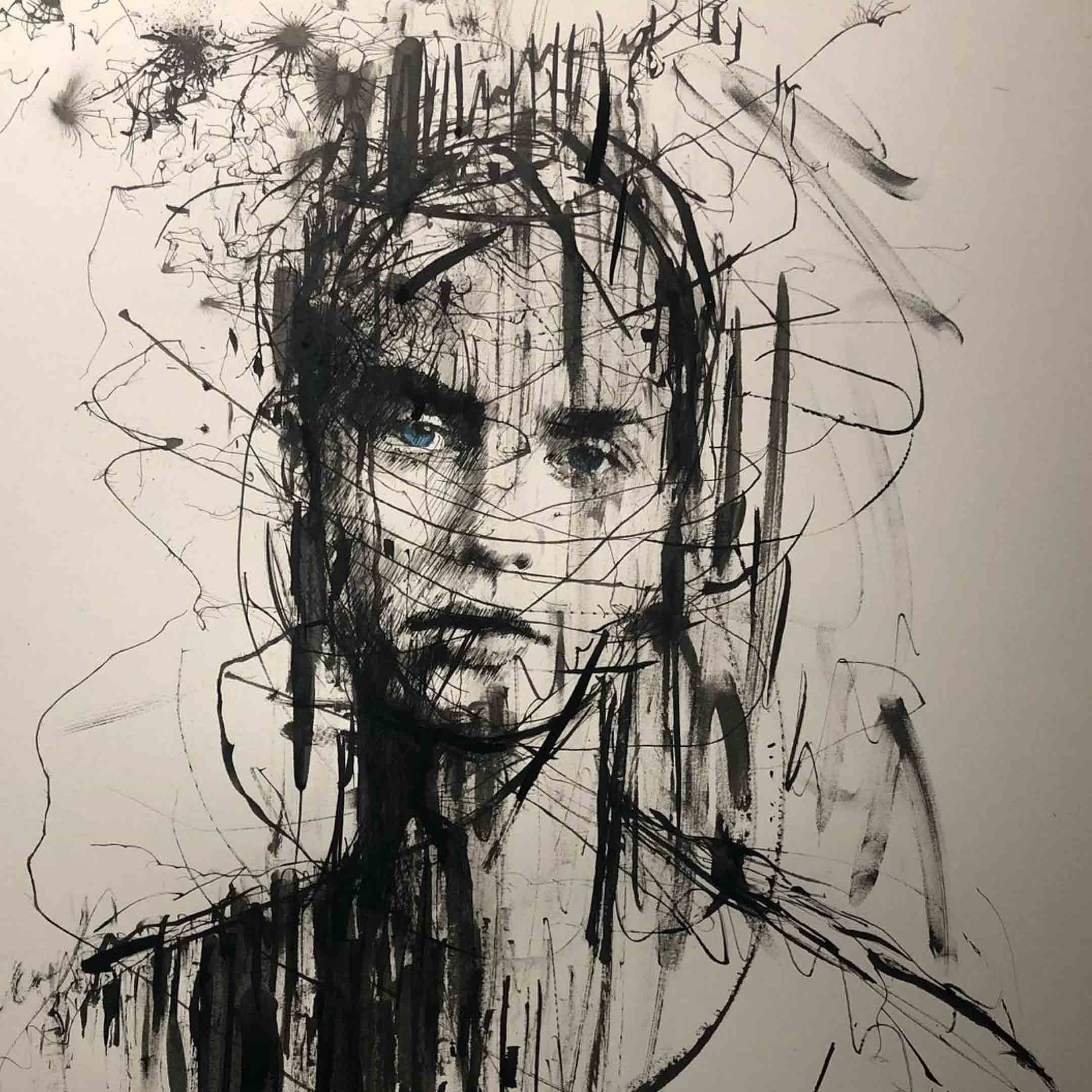 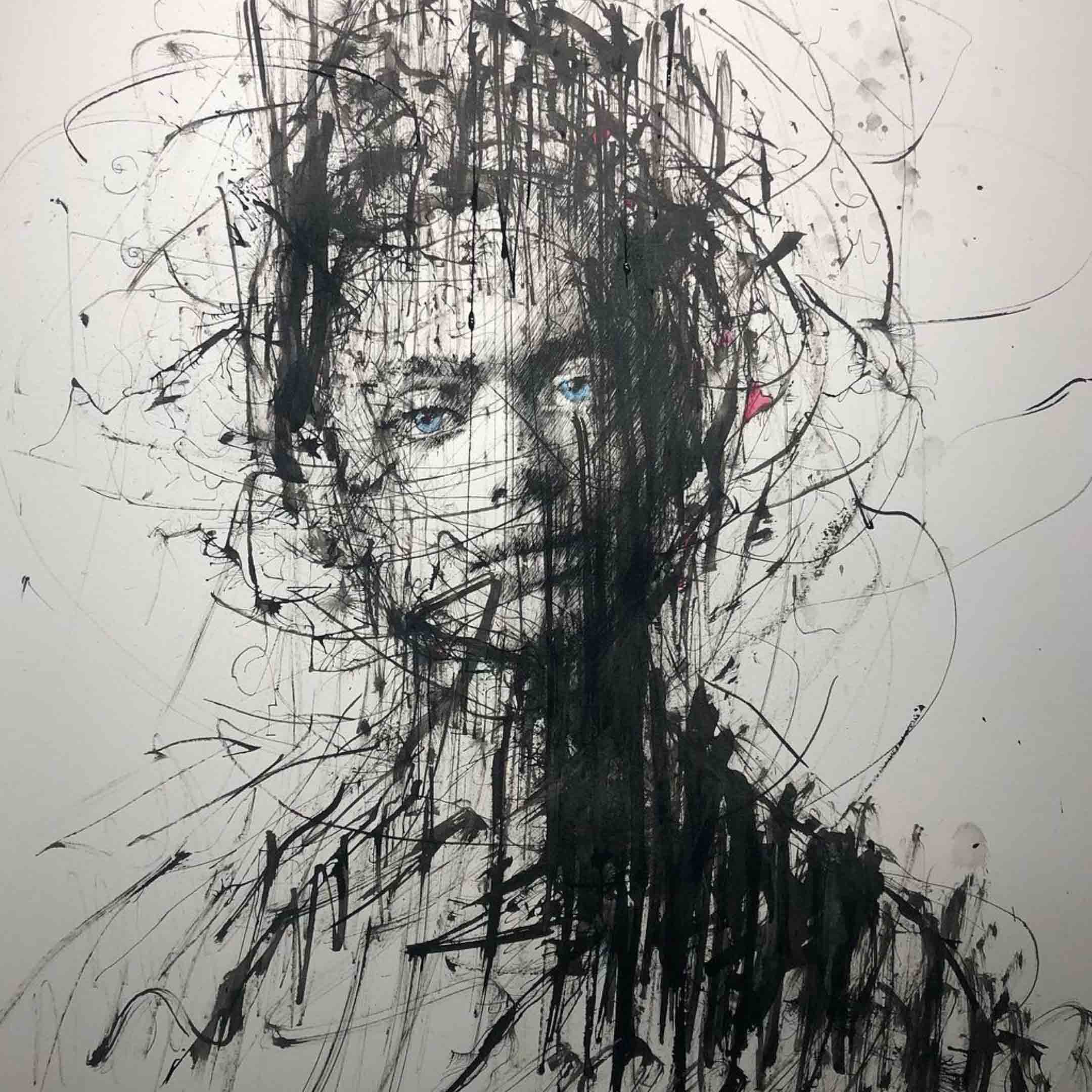 Why do you use the materials you use?

My line drawings are heavily influenced by the things I experienced when I was living in Taiwan. I was learning Tai Chi and I studied calligraphy for a while, where I really learnt about the aesthetic and beauty of mark making. Calligraphy is a type of art and discovering it has really influenced how I approach a piece of work. So, when I first started drawing, I used ink and a nib pen, which of course I still use. Through my experimentation though, during the times when my creativity is taking a break, I have discovered so many different materials that create really interesting marks. I might use twigs, bits of metal or chopsticks, once I created a painting using marbles which I’d rolled in ink. I have a variety of items I’ve collected along the way in my studio and I just grab whatever I feel like using at the time.

As far as my paintings are concerned, I only use oils, but I’ve developed ways to create different effects with the oils. There have been a lot of years of experimentation to develop the style I have now.

Do you have any advice?

Instagram is a fantastic platform for artists, and I think a lot of artists have realised that now. I think you’ve just got to put yourself out there and not be disheartened if people don’t respond well to a particular piece or even series. You have to just keep going and, more than anything, you have to believe in yourself. Surrounding yourself with people who believe in you too is important, I’m lucky in that respect. The amount of times certain people have asked me when I’m going to get myself a proper job is ridiculous, but I was adamant that this was my proper job, even when I was earning nothing.

I want my children to understand that lesson from me: believe in yourself and do what you want to do, no matter what anyone says, just go for it. I don’t know who said this but it’s one of my favourite quotes: ‘I’d rather fail at what I’m good at than fail at what I’m not very good at.’

I’ve walked into galleries in the past and they’ve refused to even look at my work. Now galleries approach me and I think it’s for two main reasons – I kept experimenting and adapting until I found something different, a style that was mine. Secondly, and most importantly, I didn’t give up.